Why do you say so? You scare me. I read this a little while ago and it doesn't leave my mind.
Did You See Me Coming?
Top

West End Boy wrote:I will write an extensive review some time soon. However, after my first complete listen I am utterly disappointed and somewhat shocked. Assuming that the songs don't grow on me massively, it seems safe to say that "Super" is easily the worst studio album PSB have ever released - at least in my personal ranking. The sad thing is that it is not even close. Most of the songs are generic, throwaway music at best, and downright trashy at worst. Except for 4-5 tracks, I don't even feel like listening to the album again - I will, however, of course listen to it in its entirety a couple more times to see if my perception changes before I write a more detailed review.

I sadly agree with you, for the most part...

Oh well. Twelve good albums in a row was a good run, wasn't it?
Did You See Me Coming?
Top

Just listened to Super for the first time. I have to say, in general, I was impressed. In the same way that Introspective was a collection of extended mixes before the short versions, one could say this is a collection of B-sides without an A-side. If a trilogy, perhaps these were the songs that didn't fit on the all important first part and the equally important last part.

For me, the clear standout tracks are 'The Dictator Decides', 'Sad Robot World' and 'Burn'.

My mileage may vary upon repeated listens.
Las Vegas 1999
Top

After the first full listening I am very satisfied. It has a lot of great songs and Neil voice sounds great (except in happiness), even when he sing in falsetto.
There's a few that did not impress me (undertow, say it to me, pop kids and groovy - i like only the 30 sec snippet i hears), but they are still decent track.
I don't agree with people who refer to stuart price as edm; in his previous works he always made the bands sound very synth pop (like killers or madonna).
I can't understand why they did not release burn as single, I hope they will soon.
I'd give 8 out of 10 now, maybe with a few listens it will be 7, but it still remains a very good album in my opinion.
Top

I really do love this album, imo it's a good mix. So scores are:

Happiness - bonkers, but a fun listen, and a great "wake up call" for the album that follows. Love the final refrain, where Neil drops the country and western "twang", and the outro that follows, with the repeated "Happiness" as we head towards the climax - 6/10

The Pop Kids - a fairly clear choice as lead single. "I am never going home" is a highlight moment on the album. I think they should have put The Full Story on the album though. 7/10

Twenty Something - this one is growing for me. There's a great PSB moment at about 3:30 in - wish this had been developed further. Lyrically, it continues a recent vein that I don't find particularly interesting. Neil needs to get out of London a bit more. Even within London, a song about professional twenty-somethings struggling to pay high rents isn't nearly as interesting as The Theatre exploring the capital from the perspective of a homeless outsider - 5/10

The Dictator Decides - The intro is fantastic, wonderfully atmospheric. The song has grown on me, but it's in need of an epic chorus (maybe making use of the opera idea that emerges right at the end?). It feels like this should have been possible, with a lyrical theme for the chorus based on the despair of the situation and a desire to escape. Some lyrical clumsiness that hits you the first time you hear it (barmy generals), but this fades with repeated listening. Lovely operatic conclusion. 7/10

Pazzo - Pointless. Would have preferred One Hit Wonder here, or nothing at all. Why have consecutive two instrumental tracks? - 2/10

Inner sanctum - A superior instrumental. Love the build up to the final trance riff. - 6/10

Undertow - A missed opportunity. It wants to be a Pandemonium style stomper, but the chorus just isn't strong enough. The rising sequencer line we heard in the initial teasers is fabulous when it returns near the end. Good, but not great - 7/10

Sad robot world - Very beautiful, but not a top drawer PSB ballad. Knowing the origin of the song (seeing the VW factory) really helps to place the song - can imagine watching the robots building the cars while the track plays. As others have mentioned, the final "robot crying" melody / effect is very touching - 7/10

Say It To Me - An enjoyable listen, catchy, with a classic PSB speak-and-response element. Doesn't live up to Drico's description of it building to an epic conclusion - it feigns to deceive, then just fades - 6/10

Burn - The sequencer line here is the greatest thing on the whole album. Just such an epic, fun, danceable track, with an effortless flow to it. Begging for extended versions. Has to be the next single - 9/10

Into thin air - Lyrically, the best track on the album. Love the little break about 2/3 of the way in, and the final, poignant lines are a fitting conclusion to the album - 7/10

Overall - good, but not great. Suspect I'll listen to it a lot in the short-term but then it will slot neatly into the lower part of my personal PSB album list. The song-writing is just not strong enough - far below Fundamental, for instance.
Love comes quickly, but is a catastrophe and a bourgeois construct etc.
Top

Look at the vinyl. Gorgeous! 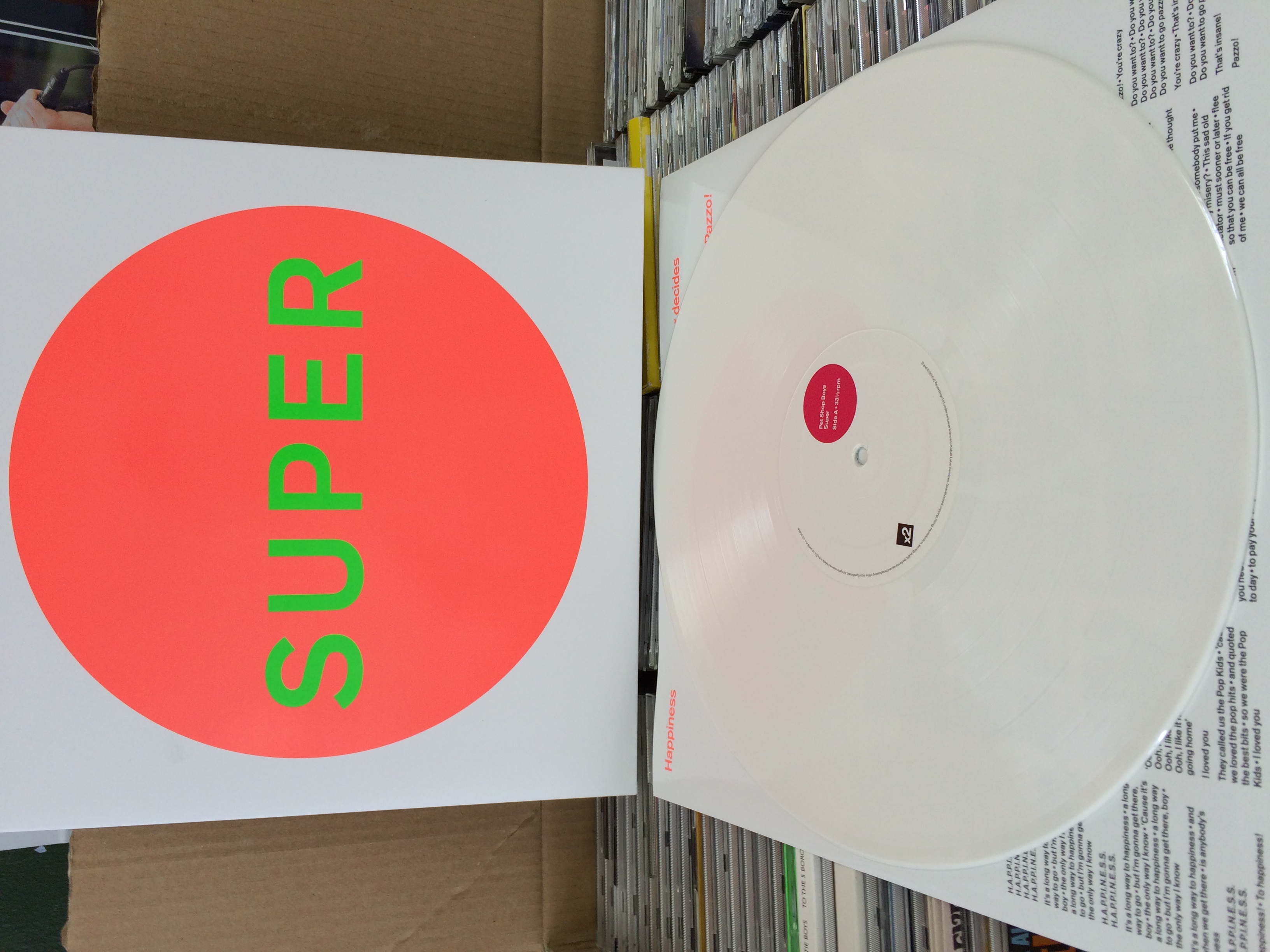 1. Happiness 8/10 - eccentric and delightful in equal measure
2. The Pop Kids 6/10 - perfectly adequate retro dance-pop with nothing particularly notable or special about it
3. Twenty-Something 7/10 - darker than it initially sounds, the synth riff is a real grower, enjoyable
4. Groovy 5/10 - the only track I verge on disliking, I quite like the 80's Madonna-esque intro/outro but the whole track is somewhat messy and borderline irritating
5. The Dictator Decides 10/10 - a stone cold PSB classic, dark, interesting, and beautiful
6. Pazzo! 8/10 - fantastic for what it is, can imagine it sounding great in a club
7. Inner Sanctum 9/10 - one of the best near-instrumentals they've ever done, an incredible build and drop toward the end
8. Undertow 9/10 - fantastic intro, great chorus, and an immediacy and urgency that drives it forward with tremendous energy
9. Sad Robot World 10/10 - another instant PSB classic, cold and beautiful electronica
10. Say it to me 9/10 - it doesn't sound like the Pet Shop Boys, it's current and fresh, and deserves to be a single
11. Burn 7/10 - the brass fanfare tips it over the edge into cheese for me, although it is enjoyable enough
12. Into Thin Air 8/10 - well crafted and a fitting outro to one of their best albums

In terms of overall album ranking, this is up there with Please, Introspective, Fundamental, Electric in my personal top 5.
Top

Will be back with a full review after I have listened to the album a bit more. But The Pop Kids, The Dictator Decides, Burn and Twenty-Something are very good!!!

Cant stop listen to The Dictator Decides, as good as PSB gets, a classic! Like someone else said, it sounds a bit Leonard Cohen, not a bad thing if you ask me!
Last edited by dynamobjornen on Wed 30 Mar 2016, 5:22 pm, edited 1 time in total.
"Sometimes someone gets upset doesn't hear the laughter takes it as a threat".
Top

OK, two days in and a couple more observations. I think they should have led the album with Burn as opposed to Happiness. Happiness is just a bit too weird for an opener. And I think they really chose a great closer, Into Thin Air is really a perfect end to the album.

As far as the rest, still enjoying it quite a bit.
“Unless you consciously include, you will unconsciously exclude”
-Stephen Frost
Top

Happiness - Deliriously joyous dance trifle that doesn't outstay its welcome unlike the slightly overlong Axis- part of me admires them for opening the album with such an unconventional composition yet i'm also thinking that this could have been a mega pop number if they added a new section or middle eight and penned 2 verses for it. A squandered opportunity. 7

The Pop Kids - Deserving to be the lead single for sure yet feels like the middle of the pack of the Boys incredible singles output. 7

Twenty Something - Really enjoying the jittery cheap-sounding synths which makes me feel like i need to hit a cheap taco stand in California. Good lyrics and solid musically speaking...love how the chord progresses to amplify the rather dismal theme of the number. 8

Groovy - Fun, catchy but throwaway...it does fit the theme of superficiality and simple hedonism. Good thing it is short. 5

The Dictator Decides - One of the few tracks that recalls the erudite side of them with fully fleshed out lyrics. I imagine more of them have been saved for the next album? Bonus points for messing up the opera singer's vocals and thus giving us a spooky sinister end! 7

Inner Sanctum - This has grown on me over the weeks, even though like Axis, it feels rather dated to me. Wish they made more unexpected/crazy choices like they did with Happiness with the instrumentals. 6

Undertow - Love the opening bars but then it's just a mirage as what unfolds is a sprightly pop number that feels strictly on autopilot. The lyrics don't match the music and it boasts of one of their weakest middle eight section. Most disappointing track especially hearing the early word on it. 4.5

Sad Robot World - Middling. Sports a below average melody in contrast to so many drop-dead gorgeous lines that are in their ballads. 5

Say It To Me - Decent reggaeton-inflected number that sounds like single material but seems to end to soon. 7

Burn - Nothing original, yet the Moroder-driven track seems to hum with sex appeal and even some menace. Guess some classic templates are timeless for good reason. Just wish they cooked up something fresher than 'burning the disco down'. 7

Into Thin Air - Classic PSB melancholic material that is a notch or two below the great ones in that category. 7

This is a most curious album from them. In some ways, i feel like some of the songs are under-developed yet it is a fairly energized and somewhat enjoyable album from them. Perhaps for this round, they have chosen to pare things down, amplify the punches in an effort to reach stay 'relevant'?...unfortunately there are no true knock-outs, like Vocal or Invisible or even the special 'bonus' track of the expended Yes - This used to be the future.
Top

Only a few listens in full so far, but especially loving Say It To Me and Burn, both of which I think are really quite brilliant , and the former reminds me of Dreamer by Living Joy.

Overall the entire album gets a big thumbs-up from me, and it is almost extraordinary to see them releasing such captivating and thought (discussion!) provoking music this far down the line. Fair play to them.

Furious angels will bring you back to me
Top

After that I predict they will settle down to a few, sparsely released Fundamental-style albums.

This quick-fire EDM period might be funding that semi-retirement phase, I recon.
Top

Re: RE: Re: "SUPER" - album reviewed by forum members

After that I predict they will settle down to a few, sparsely released Fundamental-style albums.

This quick-fire EDM period might be funding that semi-retirement phase, I recon.

D:
Look left, then right
And run for your life
Top

Is that code for something?